Lincoln Memorial, Washington, D.C. | August 28, 2020
The first time I heard about the March on Washington was from The Cosby Show. "The March" first aired when I was only 2 years old, and I obviously don't remember it then. It wasn't until I got older and the network aired reruns of the episode that I learned more about the significance of the event - it's where Martin Luther King, Jr. delivered his famous "I Have A Dream" speech on the steps of Lincoln Memorial. Theo got a "C" on a class paper and wanted to rewrite it to receive a better grade. He didn't realize that he could've just asked his parents and grandparents to talk about their personal experiences.

The spiritual, physical, mental, and emotional connections they had about the March on Washington for Jobs and Freedom are the same connections I have for The Commitment March. We are in the middle of a pandemic, but racism is a virus that has plagued us for over 400 years. The death of George Floyd was the last straw that broke the camel's back. After being quarantined for months, We the People took to the streets to protest in late May. Seeing Derek Chauvin with his knee on George's neck for 8 minutes and 46 seconds galvanized the world. It was reported that protests took place in over 60 countries and on every continent except Antarctica.
We are all beyond being sick and tired! It's past time that America has a great reckoning with its racist past and present so we can change the future. There are too many Sean Bells, Michael Browns, Stephon Clarks, Tamir Rices, Eric Garners, Freddie Grays, Sandra Blands, Philando Castiles, Atatiana Jeffersons, Alton Sterlings, Botham Jeans, Breonna Taylors, and so many countless others. Jacob Blake is in a hospital right now paralyzed from the waist down after being shot 7 times in the back by trigger-happy police. They even had the audacity to cuff his leg to the bed. When will it end?

When Rev. Al Sharpton announced, "On August 28, the 57th anniversary of the March on Washington, we're going back to Washington," as he eulogized George Floyd at his funeral on June 4th, I quickly booked a flight and hotel accommodations. Not even COVID-19 was going to stop me from witnessing and being a part of history. People of all races decked out in #BlackLivesMatter attire, with their signs in hand, descended on the National Mall. Organizers passed out free water, National Action Network masks, and sprayed your hands with hand sanitizer if you wanted them to. They also checked your temperature.

​There were vendors selling t-shirts, hats, masks, flags, buttons, and artwork. People were taking videos and pictures of everything, everyone, and all the unique signs protesters made. We were all there for a purpose - to protest police brutality and racism, and fight for criminal justice and equality. We were all there to get in "good trouble."

​I'd like to think the late Congressman John Lewis and Rev. C.T. Vivian are in heaven with Martin Luther King, Jr. watching us with peace and pride today. And maybe one day I'll have a child who will ask me about my experience because this is a day I'll always cherish and never forget! 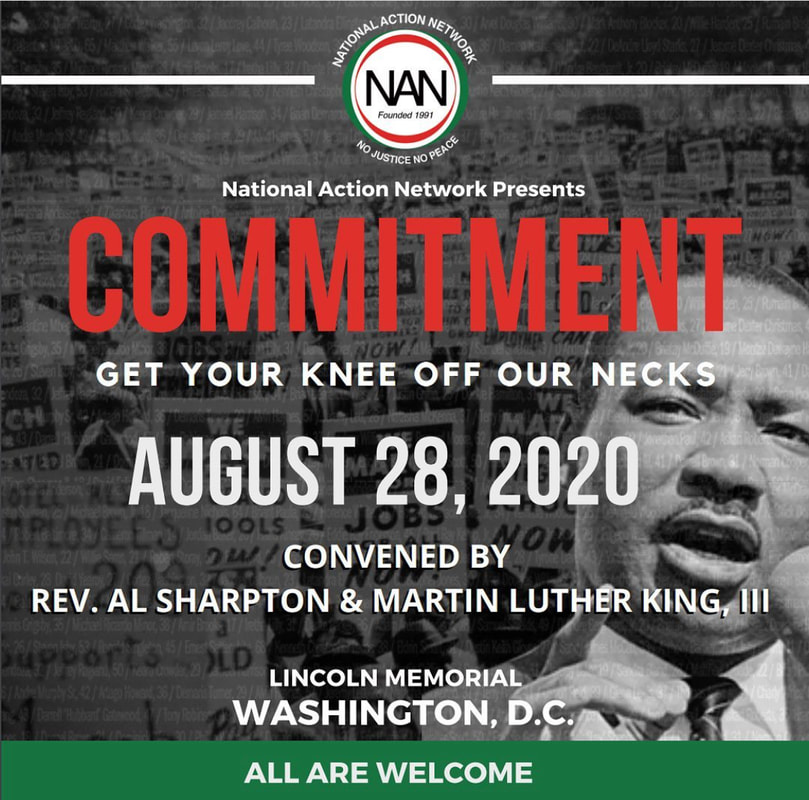 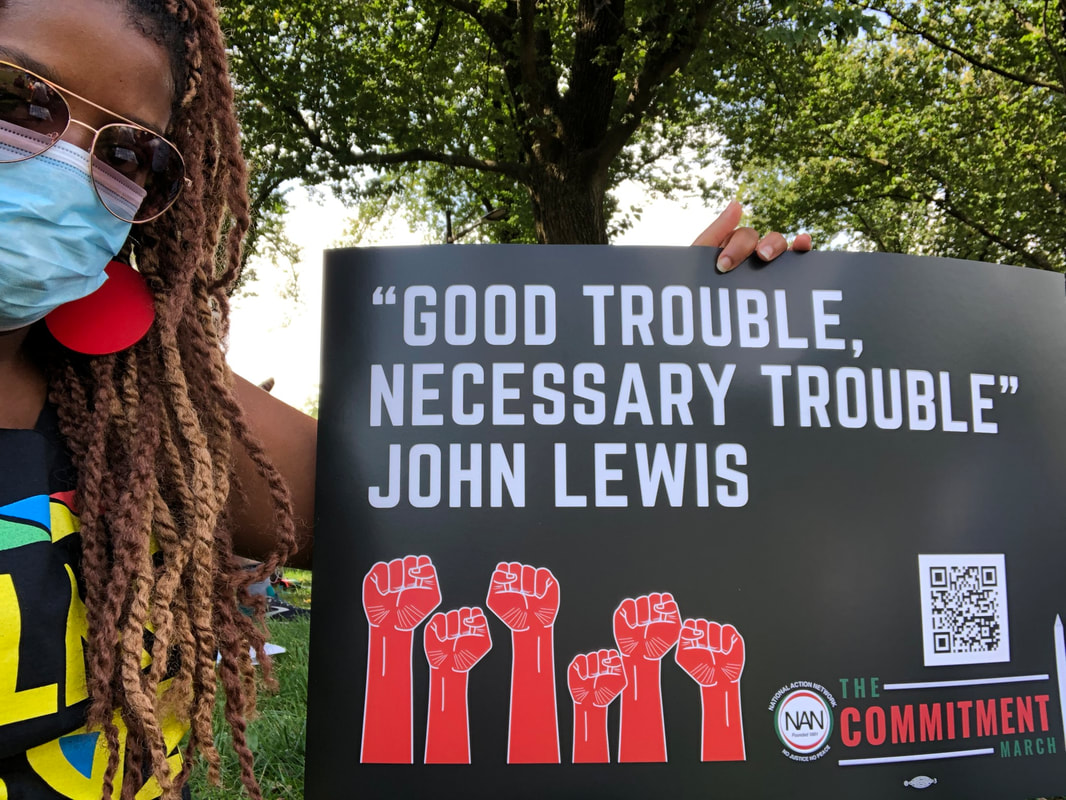 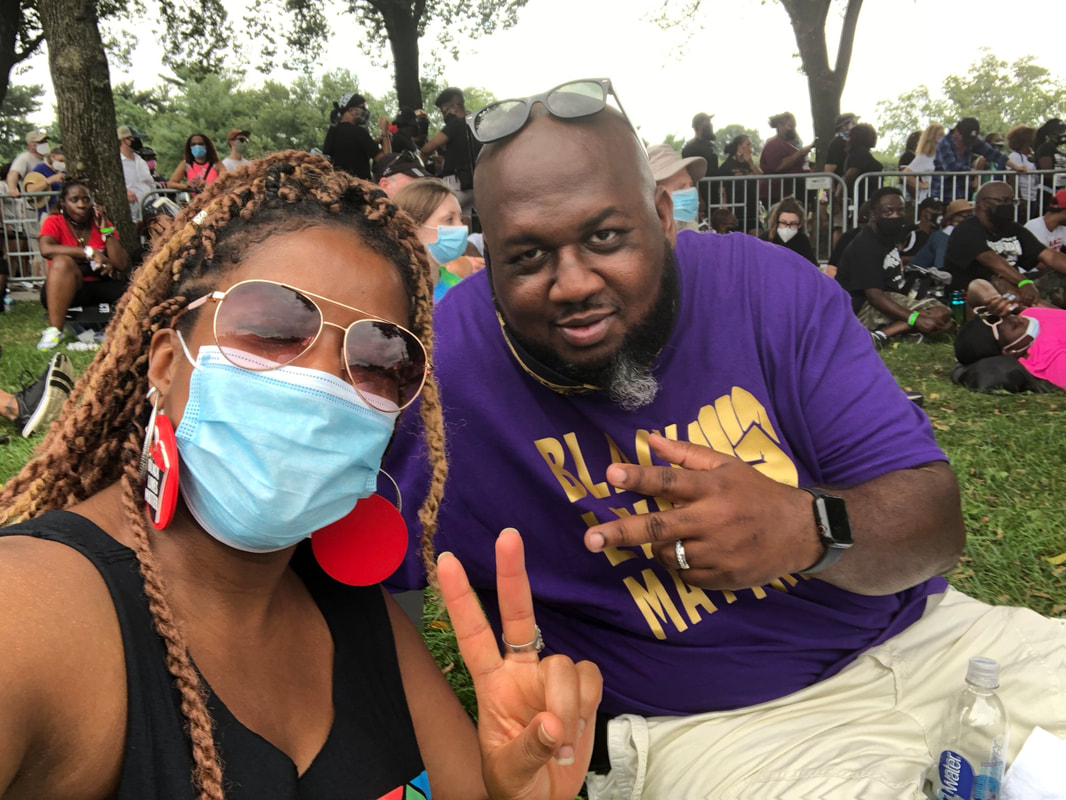 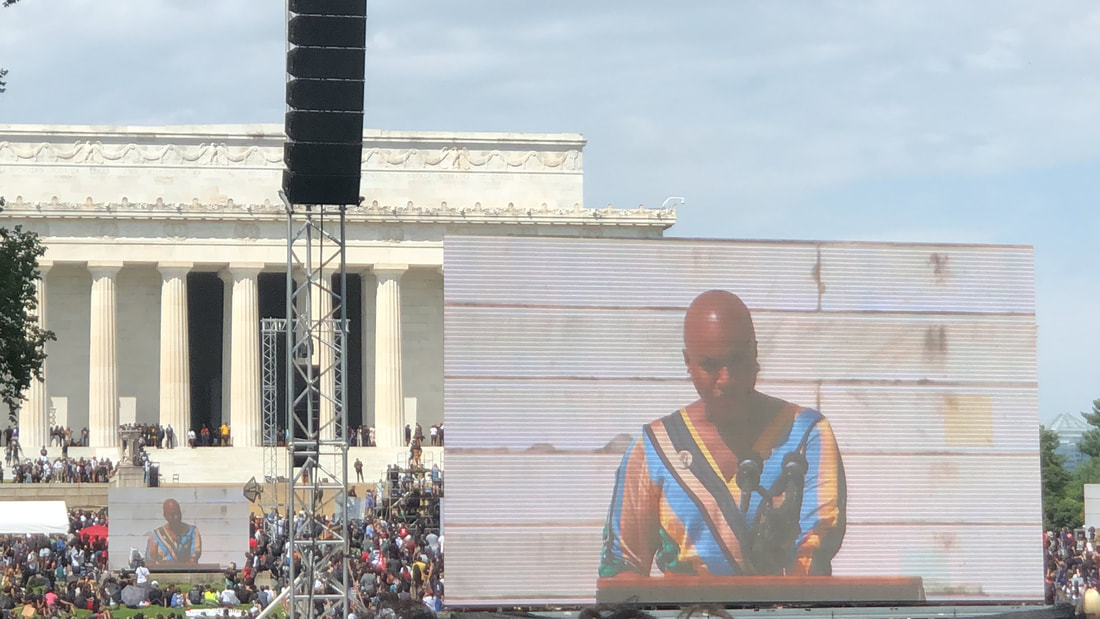 And now a word from our future Madam Vice President, Kamala Harris... 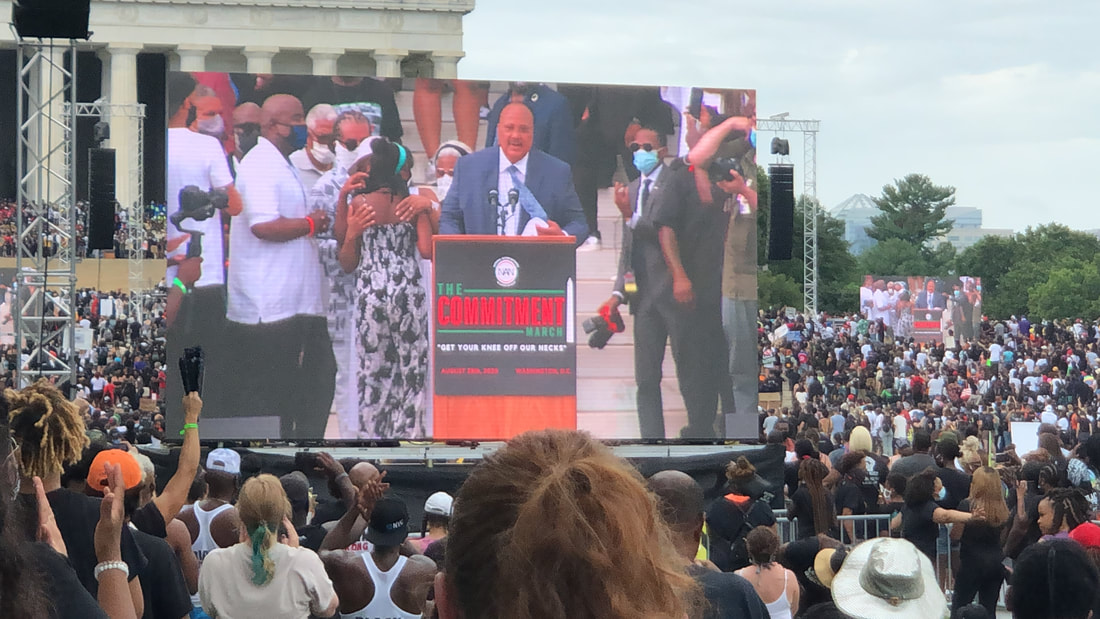 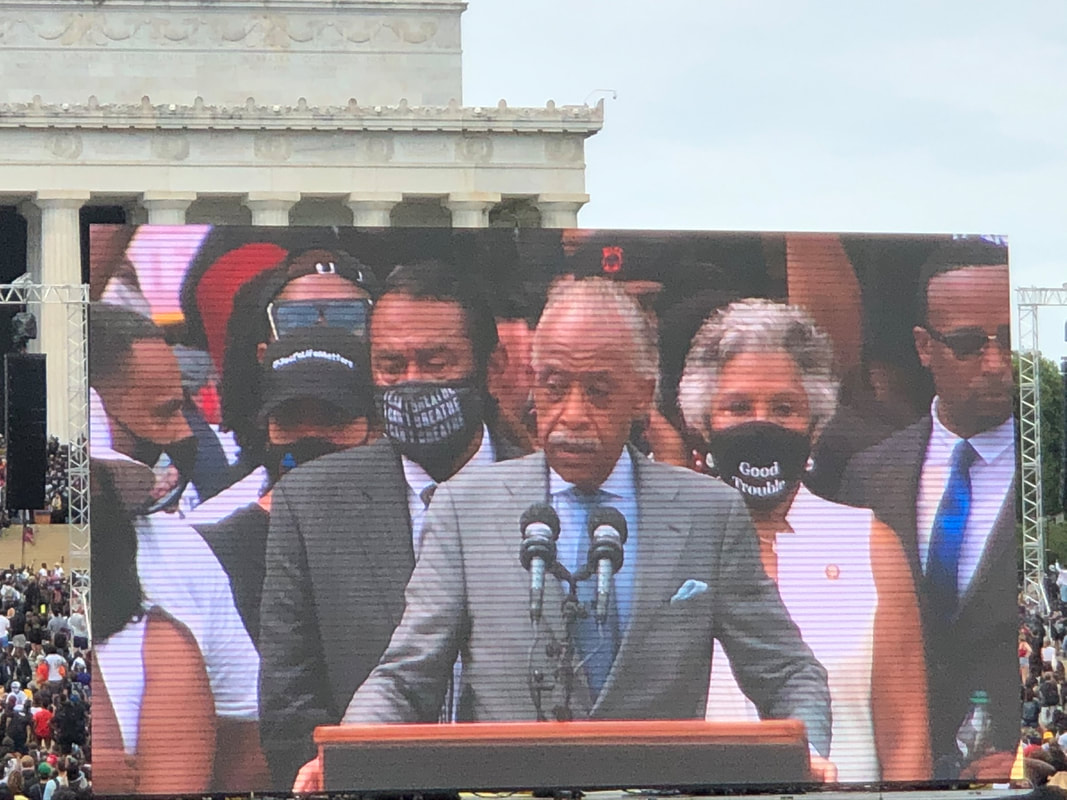 Also in attendance were the families of George Floyd, Breonna Taylor, Oscar Grant, Trayvon Martin, Jacob Blake, and others... 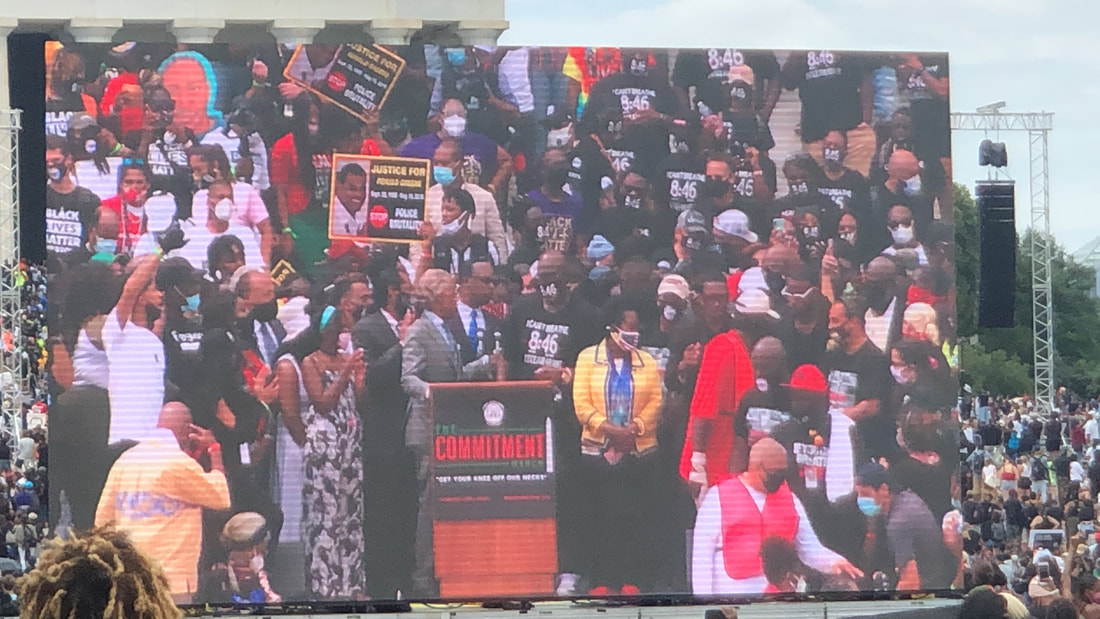 After the speeches, we marched to the Martin Luther King, Jr. Memorial. I was tired, sweaty, hot, and hungry, but my heart was sooo full. I was fired up! The mood was vibrant and electric. We were chanting, dancing, putting our fists in the air, and living our best lives for all those who couldn't - for those who are victims of police brutality. We used our voices and our presence to bring awareness to your lives and to get justice for your injuries and deaths. We know you are with us. We will rise up for you, and our future sons and daughters! 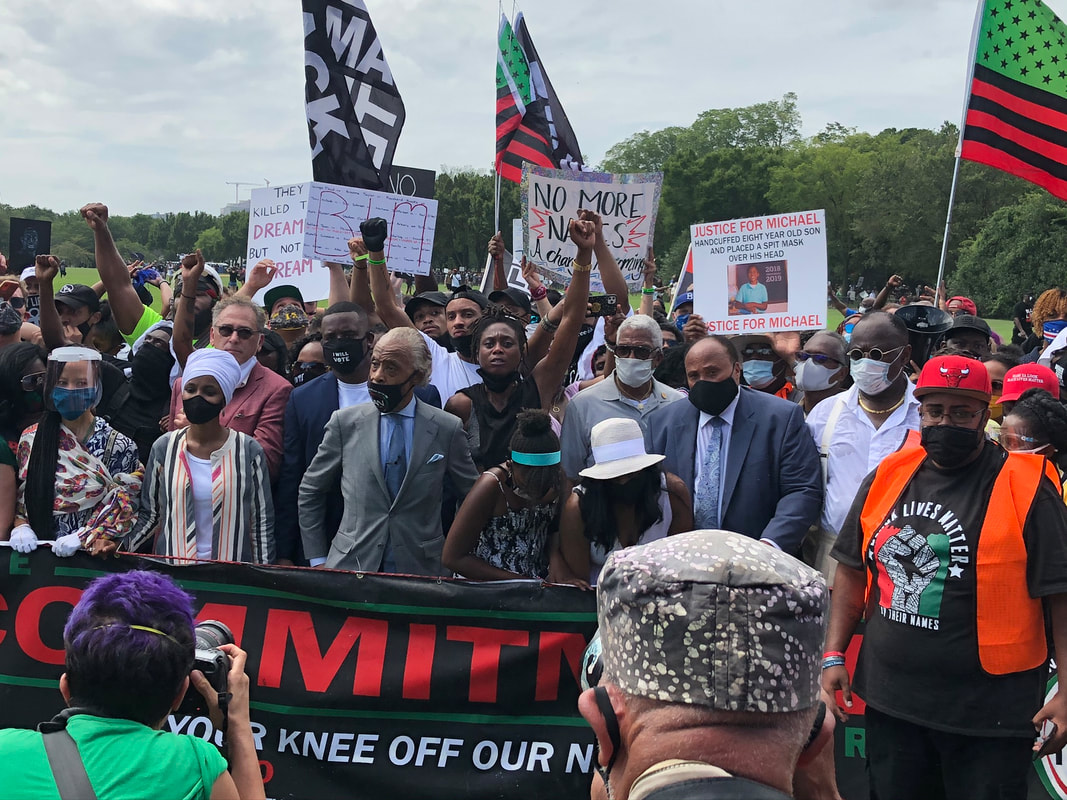 *Because I frequently reference movie quotes...*

I can now say I marched with Martin Luther King III... 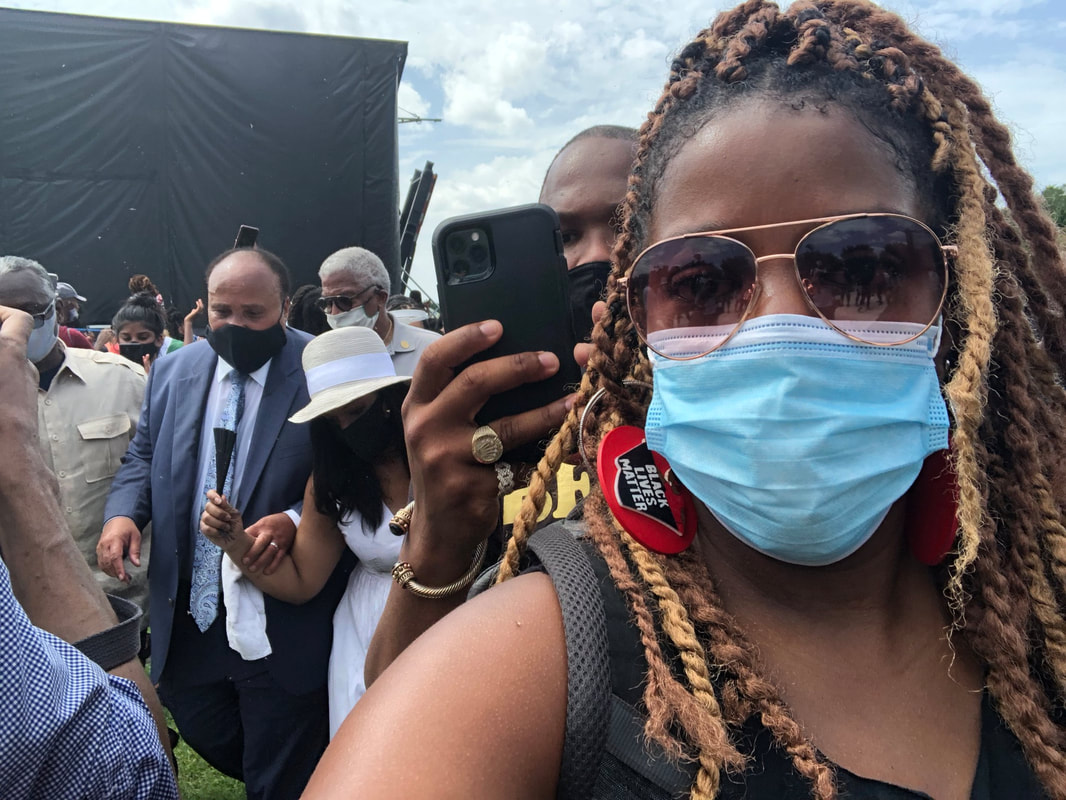 Jennifer D. Laws and Martin Luther King III seen in the background at The Commitment March in Washington, D.C. on August 28, 2020. 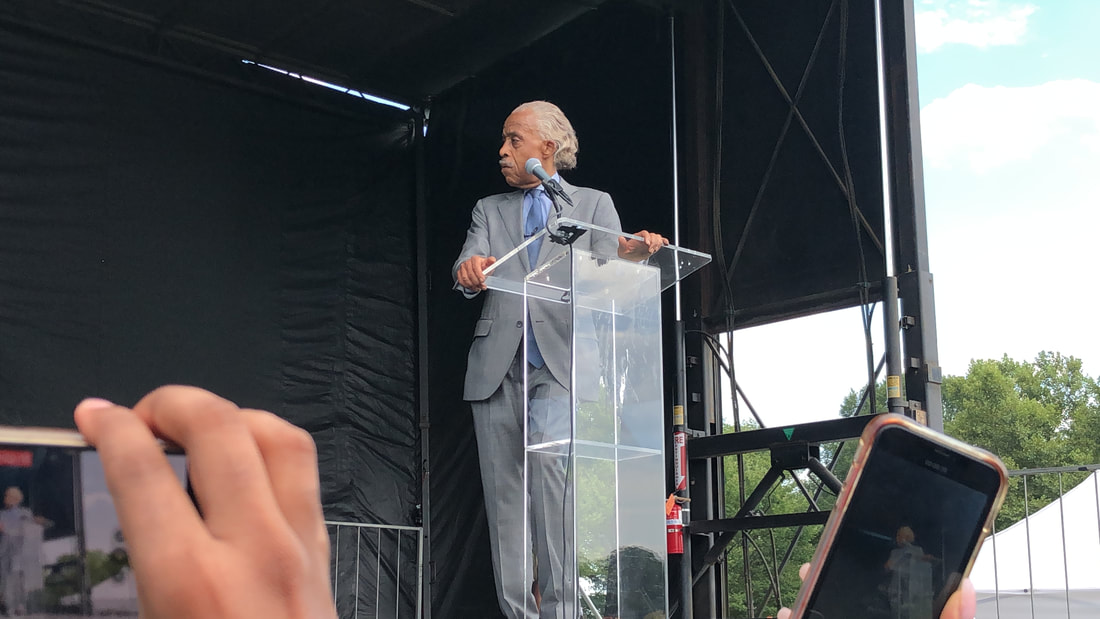 Standing on the shoulders of giants...

This is after the march when I was walking back to my hotel. We were still fired up and chanting! Definitely a day I'll cherish forever...

I was interviewed earlier today about Trump’s RNC acceptance speech, his handling of COVID-19, and how it has impacted Americans. Thanks Hangda Zhang, AJ+, and Al Jazeera for the interview!
​
p.s. Who knew my little blog would get noticed?! You never know who’s watching you... and just as I finished typing this up, I got an alert on my phone that Chadwick Boseman died. I'm heartbroken, and 2020 is doing the absolute MOST! He found out four years ago that he had stage III colon cancer and it progressed to stage IV. While filming movies, he underwent chemo and multiple surgeries.

​You also never know what a person is going through. Be kind to each other, peeps.

Peace and love and #WakandaForever!!! RIP Chadwick, rest well with the ancestors...