When Queen Oprah announced her "Oprah's 2020 Vision: Your Life in Focus" national tour last September, I was super excited! Like the rest of the world, I grew up watching The Oprah Winfrey Show. As a kid, I would be glued to the television listening to Oprah drop life gems to her studio audience, interview celebrity guests, and generously give away her favorite things! "You get a car! You get a car! You get a car!" Single-handedly that was, without question, THE COOLEST moment in television history!

I always wanted to see her in person, and now I finally had my chance! When dates were announced and tickets went on sale, I vividly remember logging on to Ticketmaster on September 13 and quickly purchasing my ticket! I was in! I WILL be in the building at Barclays Center in February! Then the next blessing came on November 20... #FOREVERFLOTUS Michelle Obama would join her on the tour for the stop in Brooklyn! My heart exploded with joy and excitement, and I was completely GEEKED! February couldn't come fast enough! 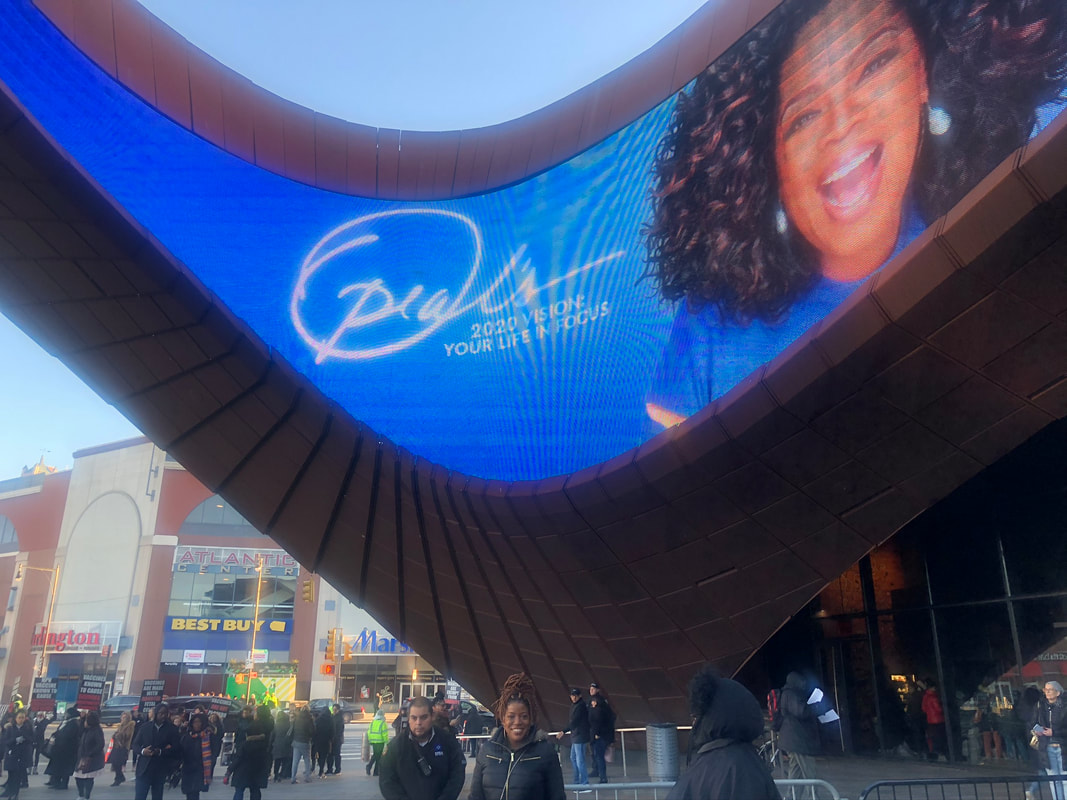 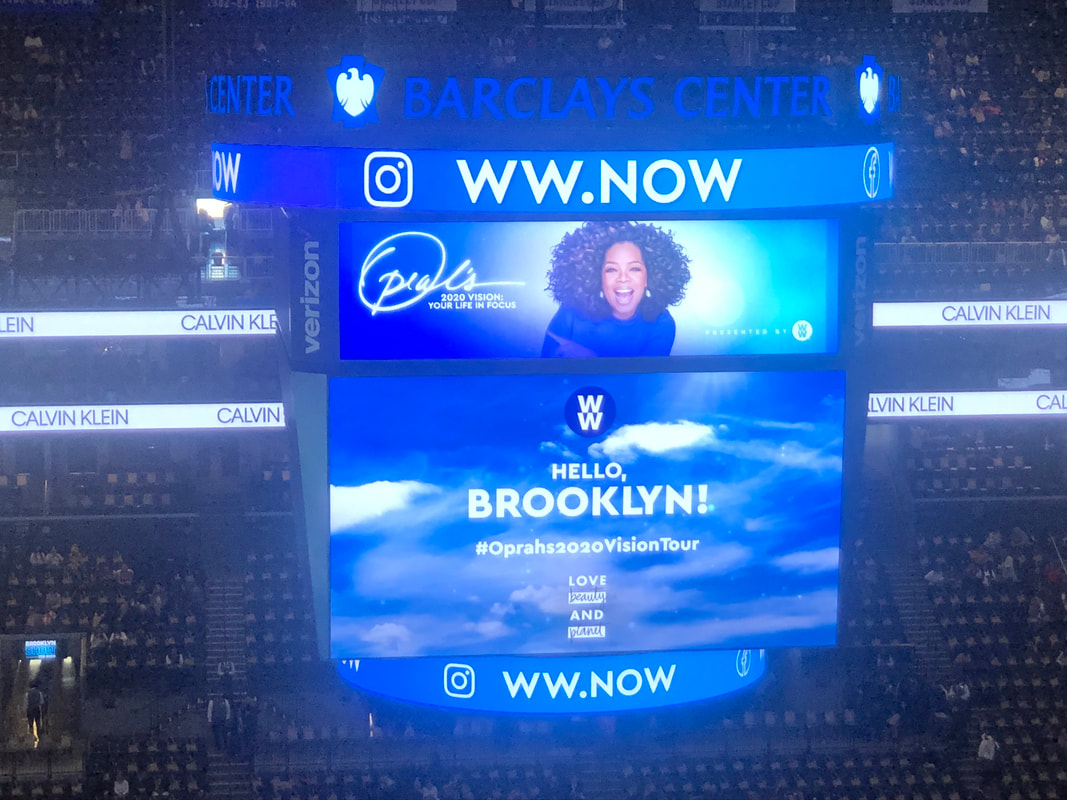 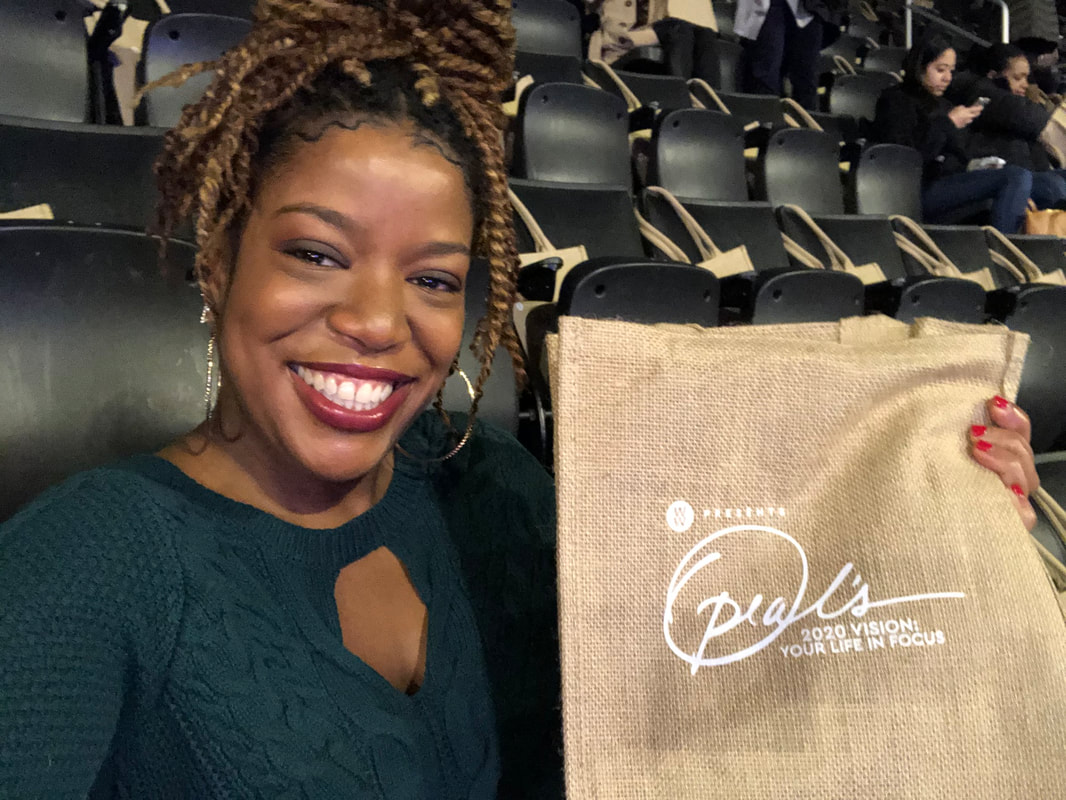 LOVE the gift bag!
I knew it would be an all-day event filled with Oprah and Michelle of course, but after seeing footage of the previous tour stops on social media... I also learned that there would be exercising, a meditation session, and so much more! I was fed spiritually, emotionally, mentally, and physically. Oprah even partnered with Panera to feed everyone! We had an option of a veggie sandwich, a turkey sandwich, or a salad that came with chips, an apple, and a bottle of water.

​I, and everyone around me who opted for the turkey sandwich, was completely surprised that there were TWO sandwiches in the Panera lunchbox! The gift bag also came with Degree deodorant, Vaseline, Love Beauty and Planet shampoo and conditioner, WW chips and a protein bar, a bottle of water, an Oprah pen, and the Oprah's 2020 Vision: Your Life in Focus workbook.
DAYBREAKER started the show with a dance party to get everyone amped, and then...
​Oprah hit the stage!
Oprah discussed her wellness journey - her upbringing, her career in media, and her yo-yo dieting. Then she brought out Tamela Mann to discuss her journey with Weight Watchers, and she wouldn't let her leave without blessing us with a song! 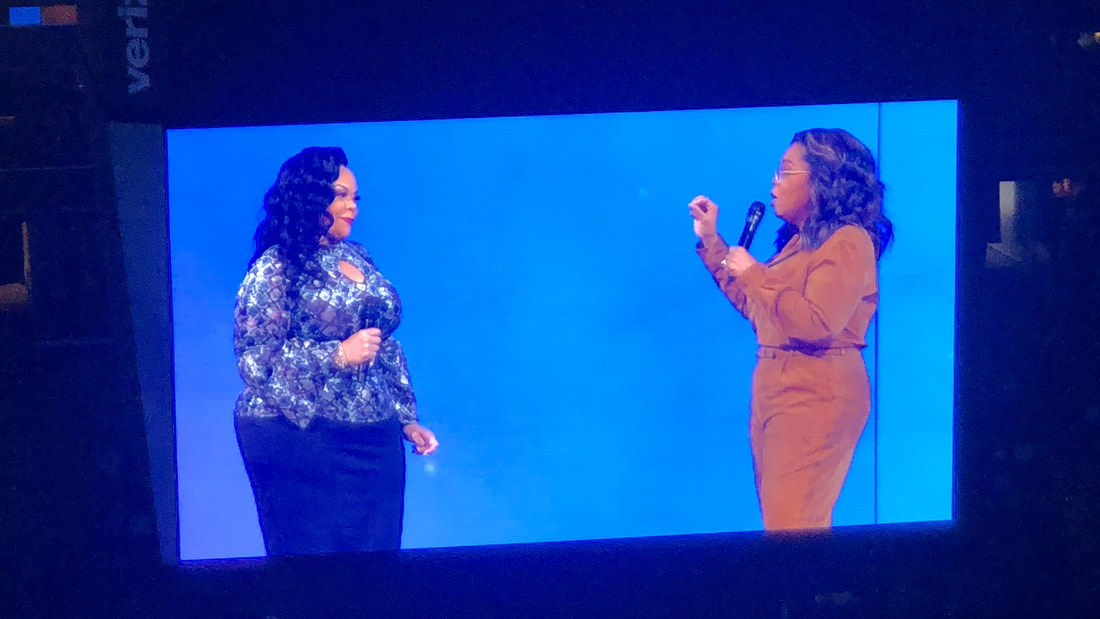 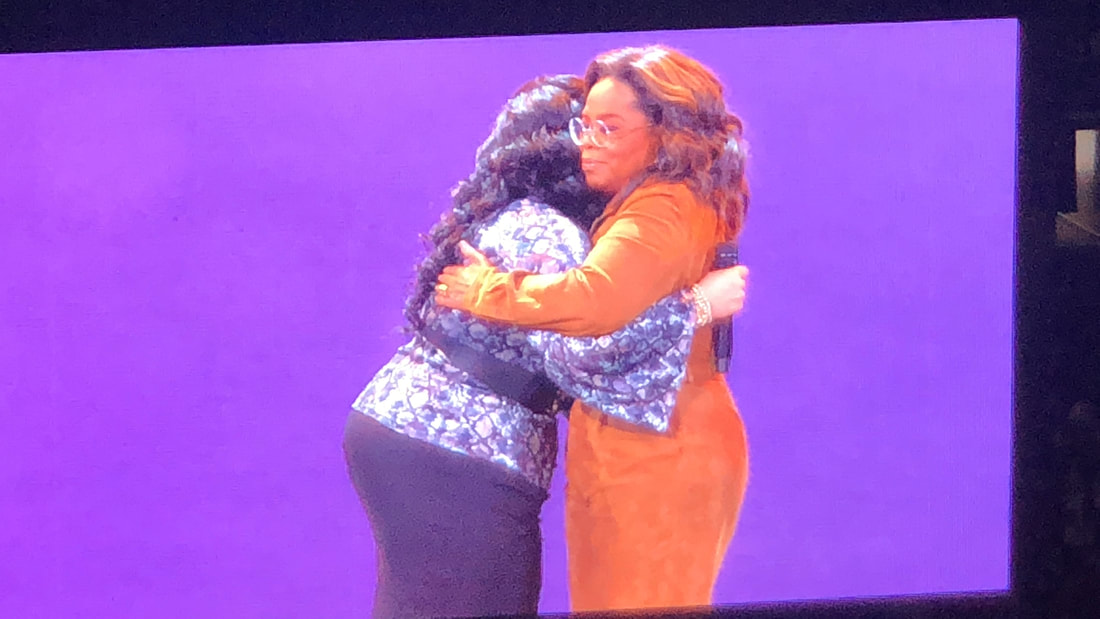 ​She also played a clip from her first time on the Johnny Carson show when Joan Rivers interviewed her. She conveyed how embarrassed and caught off guard she was when Joan asked her about her weight gain because this question wasn't mentioned in the pre-interview call she received from the show's producers.
Oprah said she was so fixated on her $800 Stuart Weitzman's shoes (which she said was a huge splurge for her back then) and how they (and the white stockings) matched her blue dress that she wanted Joan and everyone else to notice them. She didn't want to talk about her weight, but Oprah is the consummate professional and always quick on her toes so she openly discussed the diets she'd been on. That's when Joan asked her to do a weight loss challenge with her.

​And that led to her 60 lb weight loss in 4 months. She said while she was proud that she hit her target weight, she wasn't balanced (she was on a liquid diet the entire 4 months) or particularly happy, and before she knew it, she gained back 5 lbs the first week after this episode aired. This was a great segue into the next topic... 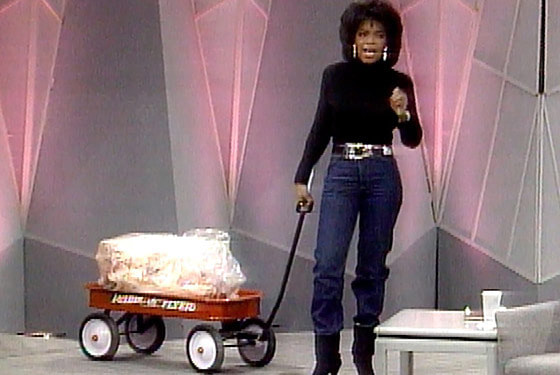 courtesy of The Oprah Winfrey Show and New York Magazine
We did a workbook exercise titled "What's Your Wellness Quotient?" It was a self-assessment quiz for us to reflect on where we are now, and we rated our personal experiences on a scale of 1 to 4 on topics of emotions, learning, work, nutrition, movement, purpose, and relationships. Then we tallied our quotient to see how much we needed to improve. I scored 118 between the 105-124 range, one tier below optimal level, and it showed me that "with a few tweaks, balance can be yours."

Up next was Jesse Israel who guided us through a meditation exercise called "The Big Quiet." You could literally feel the energy in the room. It was calm, soothing, and peaceful. It was much needed and really set the tone for the next workbook exercise... "Set Your Intention." 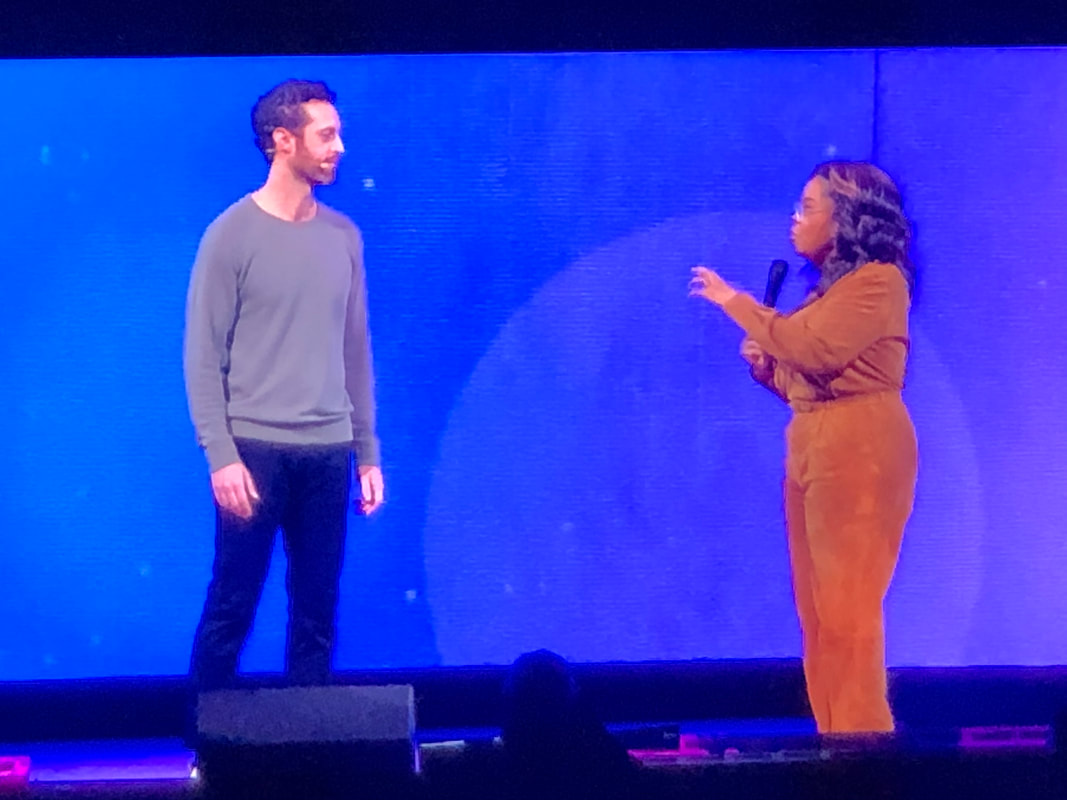 Step 1 was to reflect on a time when you set a goal that you didn't reach and write out why you wanted to reach it. It showed me that the goal I wanted to reach was wrought with the wrong intentions which is why it hasn't happened...yet. My intentions weren't clear and it didn't align with the truth of who I was. I was trying to control the situation rather than letting it flow to me in its divine timing. While I won't share what my goal is because I want to protect my dream, I still believe that it will become my reality now that my intentions are clear, and it will happen when it is supposed to happen!

Next up was a hilarious *true* story about a 3 week old lost tampon by Rachel Hollis. I won't go into details about her ordeal, but she somehow managed to tie it into failing forward and getting up after you've been knocked down! I really need to start listening to her podcast! She is so funny!​ 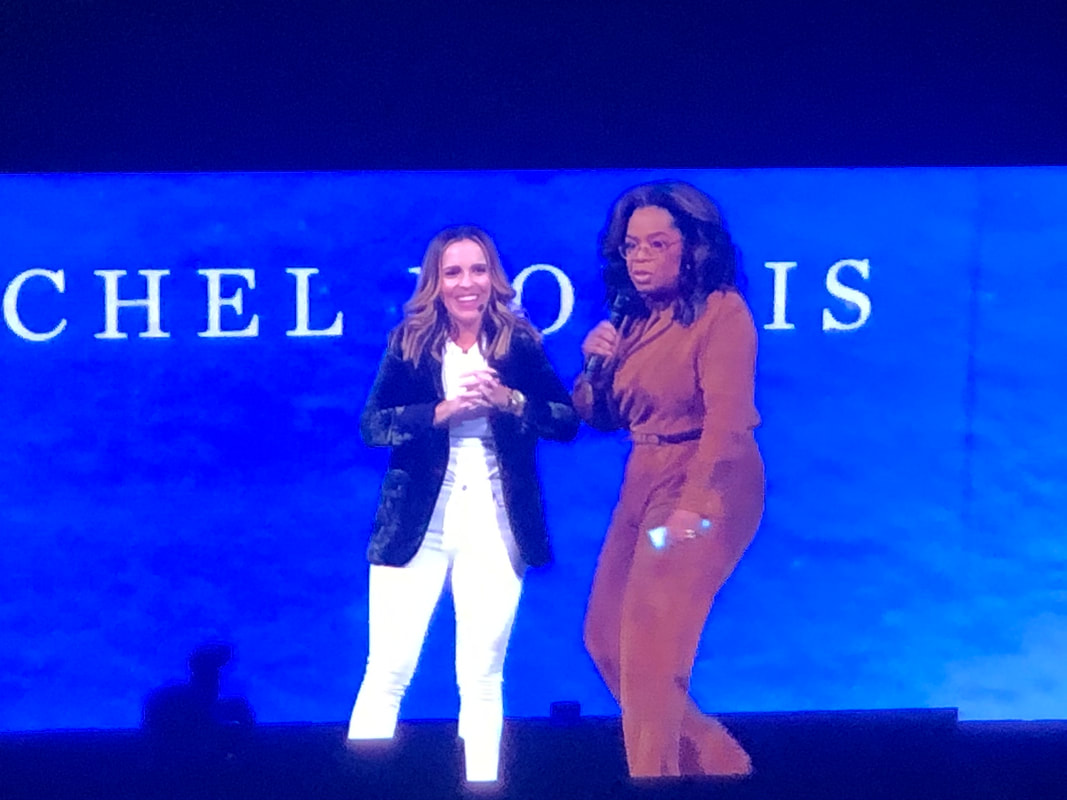 After Rachel was the lunchbreak, and up next was Julianne Hough with the KINRGY movement experience to work off those two sandwiches! Once we got our energy back up, we went back to the workbook to create our commitment contract so we could align with our purpose and vision for ourselves for 2020 and beyond!

​Next, Oprah brought out Mindy Grossman and showed a video of the founder of Weight Watchers, Jean Nidetch. I had no idea how WW began, so it was a real treat to see some old footage of her and how she got everyone on board to live their best lives by improving their health and wellness.

And now... after a full day, we were all ready for #FOREVERFLOTUS!

Michelle discussed her famous quote, "when they go low, we go high"
​

Michelle discussed the advice she gives to her daughters
​ 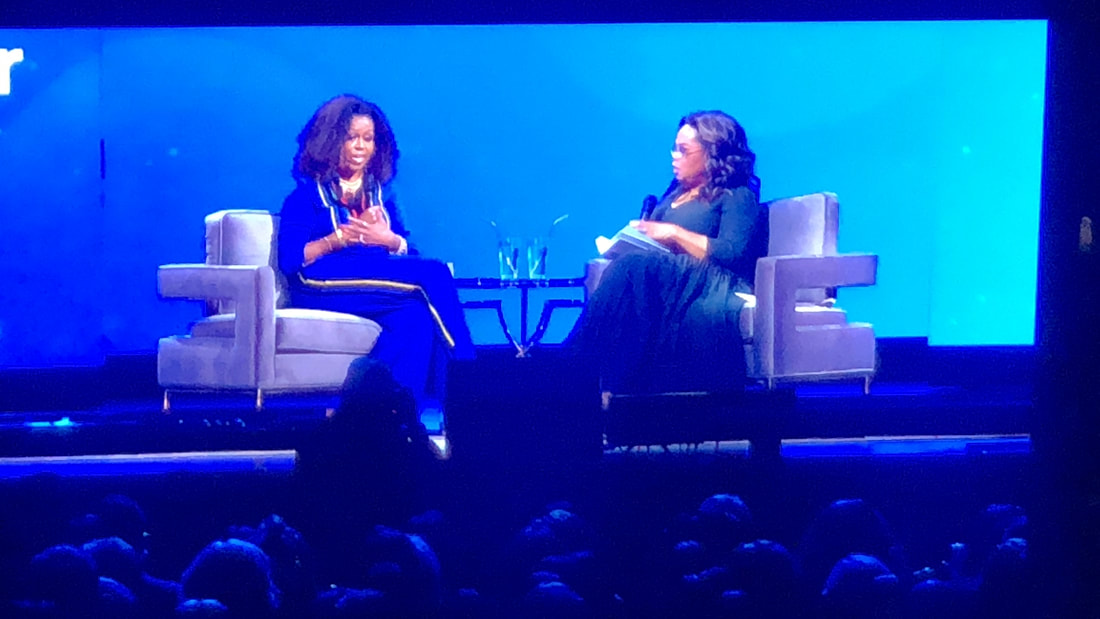 ​The conclusion... what an AMAZING discussion! 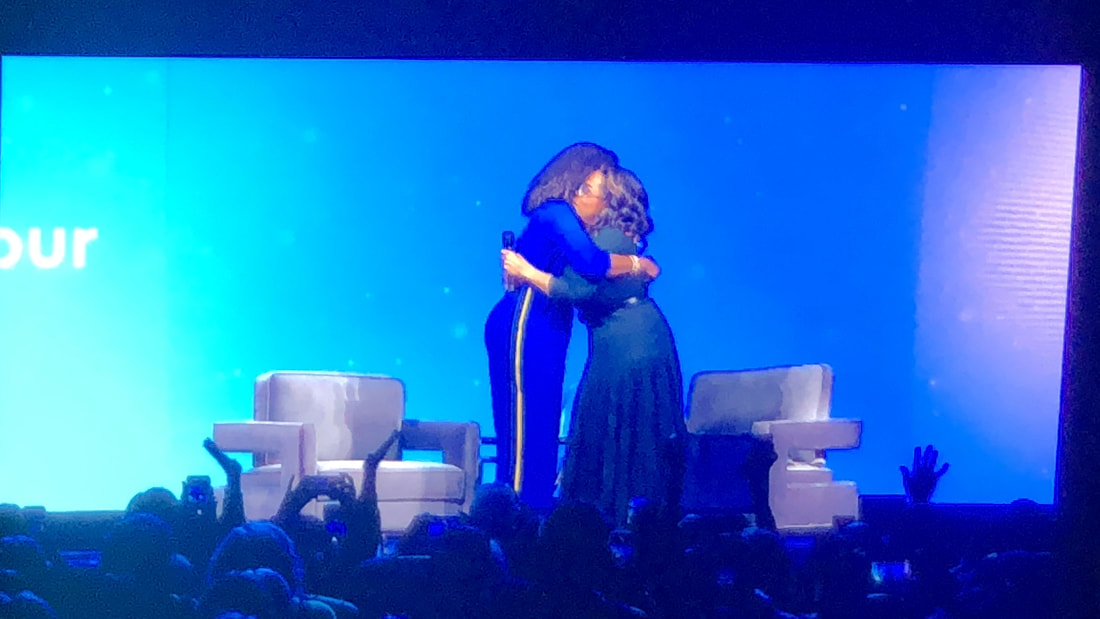 After #ForeverFLOTUS exited the stage, Oprah talked about her parents. How they met in school. How one single encounter between them brought her into this world. How her relationship with her mother wasn't close and it wasn't until her mom was dying that she was able to seek closure. She told us while their relationship wasn't the best, God knew what Oprah needed from her parents to make her the person she is today, and so she told her mom, "well done."

​Everyone around me was in tears, and so was I. It was such a touching story of forgiveness, understanding, empathy, and growth, and it reminded me of my relationship with my mom. I'm glad we're in a much better place now!

​I had such an amazing time! I’ve been looking forward to this day for months, and it was wayyyy more than I could’ve ever imagined. I was already amped just going, and I walked away feeling more aligned, more motivated, and more focused than ever. My vision is clear! #2020

Thank you, Oprah, for sharing your wonderful gifts, heartfelt stories, and your miraculous journey with us. You are such an inspiration, and I’m ready to do the work and use what I’ve learned today to live a life that is more balanced, more purposeful, and most importantly, more INTENTIONAL!